While Ireland is over half way towards meeting each of its renewable energy and energy efficiency targets, bridging the gaps by 2020 will be challenging. This insight summarises the EU's and Ireland's energy targets, and reviews the progress made to date in achieving them.

Ireland used nearly 162 TWh (~14 Mtoe) of energy in 2015, with electricity, heat and transport accounting for approximately one third each. 88% of this energy was imported.

Oil remains the largest single fuel source (48%) because, although it only accounts for 2% of electricity generation, it dominates transport (97%) and meets about one third of residential heating demand. Natural gas makes up just over one quarter of the energy requirement (27%), while coal and peat (still) account for almost 16% between them.

The figure below shows how, together, the transport and residential sectors account for two thirds of consumption. Both sectors comprise a very large number of very small energy consumers, i.e. individual vehicles and homes. This contributes to the challenge of adopting more sustainable alternatives in these sectors.

At 9%, renewable energy contributes a relatively small, but rapidly growing, share of Ireland's energy mix. The chart below illustrates the growth of renewable electricity (RES-E), renewable heat (RES-H) and renewable transport (RES-T) since 1990.

Notwithstanding the relatively rapid recent growth rate, Ireland’s 9% contribution is one of the lowest levels in Europe, as can be seen in the graphic below. 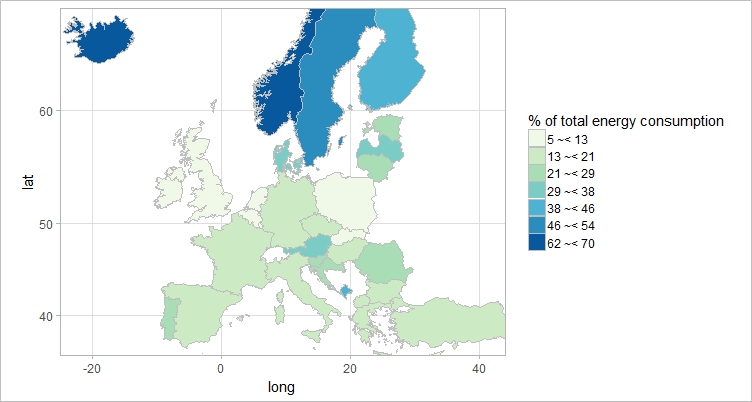 Ireland's overall renewable energy target for 2020 is 16% and there are national targets of 40%, 12% and 10% respectively for RES-E, RES-H and RES-T. The overall target and the RES-T target are both mandatory. Agreement has not yet been made on the allocation of the EU's 2030 targets at Member State level and Ireland currently has no national targets for 2030.

Ireland's 9% renewable energy contribution is still well short of the overall target (16%), and there are also significant gaps to the RES-E, RES-H and RES-T targets. The progress made to date, as published by SEAI (Ireland, 2015 data) and the European Environment Agency (EU-wide, 2016 projection), is summarised below.

The recently-published National Mitigation Plan notes a requirement of 'between 780 MW and 1,180 MW [of RES-E] to be installed by 2020 if the 2020 electricity target is to be reached, requiring an increased rate of installation'. Wind energy is likely to continue to dominate the renewable electricity sector until at least 2020.

Hydro accounts for 2.5% of consumption, but there is very limited scope for further deployment in Ireland. Taken together, landfill gas, biomass and biogas account for just under 2%. Solar PV has only been installed at very small scale to date, although there is significant commercial interest in larger-scale deployments in the near term.

The 2015 energy white paper, Ireland's Transition to a Low Carbon Energy Future, committed to introducing a new support scheme for RES-E as well as arrangements for facilitating community involvement in renewable energy projects. These supports are currently under development.

The heat sector remains dominated by oil and natural gas, with coal and peat still contributing almost twice as much as renewables. Renewable heat accounts for 6.5% (2015), down from 6.6% in 2014. Over three quarters of RES-H is derived from solid biomass, with heat pumps, solar and biogas making up the remainder.

A significant proportion of the 6.5% RES-H figure is derived from the combustion of wood residues in a small number of large board mills and sawmills. It is unlikely that RES-H in the industrial sector will double by 2020, so the achievement of the target will be largely dependent on significant deployment of renewable heating in the residential, commercial and public sectors.

A renewable heat incentive (RHI) is currently under development. This will provide a tariff to bridge the gap between the costs of alternative fossil-fired heating and selected RES-H technologies. The objective is to provide a financial incentive to address perceived financial and non-financial barriers to RES-H uptake. It will be targeted at industrial and commercial heat users that are not in the EU emissions trading scheme (ETS). This cohort could comprise approximately 3,000 installations. The RHI will not be available for the domestic sector.

Modelling undertaken by SEAI in 2015 indicated that RES-H will account for 7-11% of total heat by 2020, across a range of deployment scenarios. Subsequent analysis suggests a figure of 9%, i.e. that Ireland will fall short of the 12% RES-H target.

The transport target is also challenging for Ireland, for several reasons. One is the slow take up of electric vehicles (currently ~150-200 per quarter). Another is the so called blend wall for diesel, which limits the amount of biodiesel (FAME) that can be blended with diesel to 7% by volume.

There is also a de facto limit of 5% bioethanol in petrol (gasoline) in Ireland. While the fuel quality standard for gasoline (EN228) limits bioethanol blending to 10%, in practice Irish infrastructure limits the bioethanol blend to 5%. In order to blend above 5%, petrol retailers would need to invest in forecourt infrastructure to enable a second grade of gasoline to be marketed at pumps. At present, very few, if any, forecourts are equipped to do so. Gasoline importers and refiners would also need to provide a gasoline feedstock that is designed for blending with between 5-10% bioethanol. At present, the feedstock used in Ireland is designed for blending with up to 5% bioethanol.

The European Commission's proposal for a revised Renewable Energy Directive shifts the onus for meeting RES-T targets from Member States to suppliers. It is also proposed that there will be annual targets for renewable transport fuels and advanced biofuels for the years to 2030. This will require steady incremental progress throughout the 2020s, rather than a 'sprint' to the target towards the end of the decade.

How does Ireland compare?

Different European countries have different national targets for 2020, although all EU Member States have a mandatory target of 10% for RES-T. Ireland’s progress is compared with that of other countries (as of 2015) in the graph and map below.

Fourteen countries have already surpassed their 2020 targets, while both Netherlands and Luxembourg are still less than half way towards theirs. 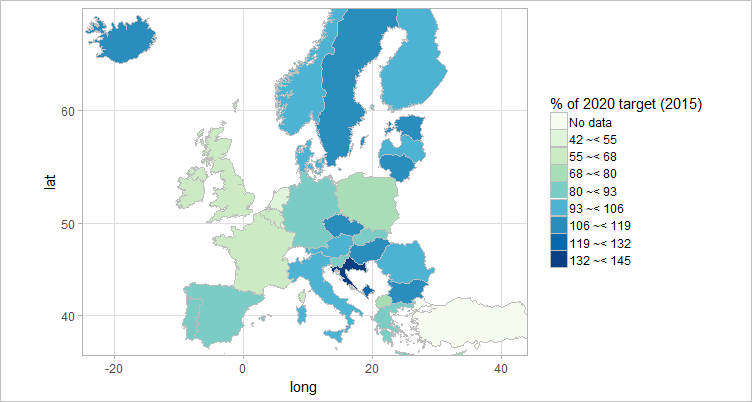 Ireland has a 2020 energy efficiency target of 20%, as well as a more ambitious target of 33% for the public sector (also by 2020). Public bodies have been challenged to act as an exemplar for other sectors and must report on their energy performance annually to SEAI. Progress equivalent to well over half of the target levels has been reported in the recently-published National Mitigation Plan - this is summarised below.

It is likely that bridging the gap to both targets will be more challenging than achieving the efficiency gains made to date. Much of the ‘low hanging fruit’ has been plucked, and more investment will be required to reach the targets.

A very ambitious national target of having electric vehicles (EVs) account for 10% of the vehicle fleet by 2020 (about 230,000 vehicles) was subsequently reduced to 50,000. The 50,000 figure was referenced as an ambition for 2020 in the 2015 energy white paper. More recent projections from SEAI anticipate that the total number of EVs will be 10,000 by 2020. The recently-published National Policy Framework, Alternative Fuels Infrastructure for Transport in Ireland 2017 to 2030 estimates that there will be 8,000 EVs by 2020, if all current policy measures and incentives remain in place.

The 411 EVs sold in Ireland in 2016 accounted for just 0.2% of new car sales. When hybrid-electric vehicles are included (2016 sales = 2,571), the contribution was 1.6%. The latest sales figures show that 380 EVs were purchased in the first half of 2017, an increase of 27.5% compared with the same period in 2016. Sales figures for EVs, hybrids and conventional vehicles are summarised below.

The Fuel Quality Directive (FQD) was transposed into Irish law in April 2017. Ireland’s target is a reduction in the carbon intensity of transport fuels by 6% by the end of 2020, from a 2010 baseline. Byrne Ó Cléirigh analysis of the progress made by Ireland’s suppliers towards the 6% target indicates a shortfall of 550,700 tCO2eq relative to the target (2015).

The 2007 energy white paper, Delivering a Sustainable Energy Future for Ireland, established a target of 400 MW of installed CHP capacity by 2010 and sought to achieve at least 800 MW by 2020. In 2014, the total installed CHP capacity, according to SEAI's CHP in Ireland 2015 report, was 339 MW, a large proportion of which was accounted for by the Aughinish Alumina CHP plant. New efforts to promote CHP were flagged by Government in the 2015 white paper, although no targets were referenced.

We discuss Ireland's progress towards its greenhouse gas emissions targets in a separate article.

This article on energy targets was comprehensively updated in September 2017 to incorporate analysis of the latest data (for 2015) published by SEAI and the European Environment Agency. The previous version of the article analysed 2014 data.